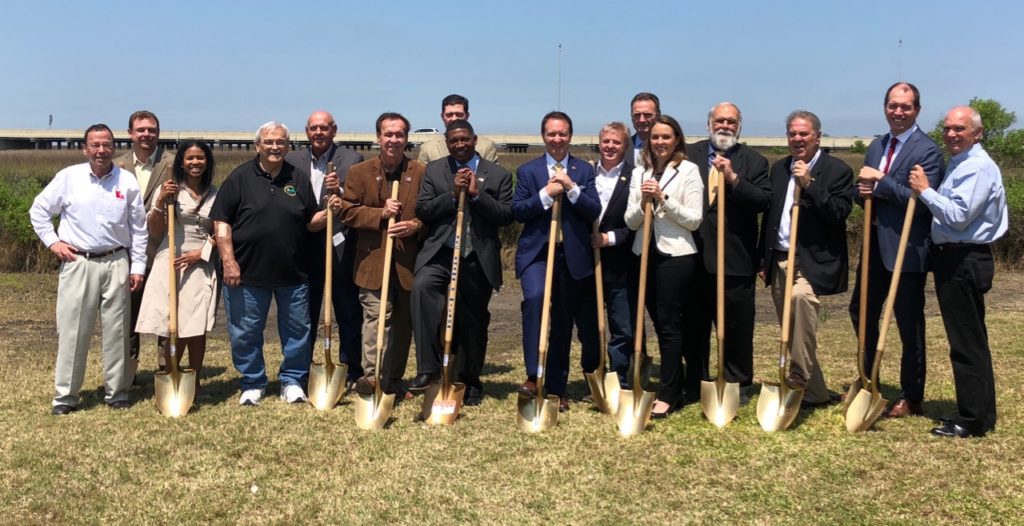 State and local officials, and members of the LA 1 Coalition marked the start of the next phase of the LA Highway 1 Improvement Project today at a groundbreaking ceremony in Leeville.

Phase 2E will widen the existing elevated highway structure at Leeville to provide a broader curve for motorists traveling southbound and will extend the existing elevated highway to the north, which will connect with the future elevated LA 1 to Golden Meadow. Completion of the $13.3 million project is expected in early 2020, with $6.6 million in construction funds provided to the State by industry partners, the LA 1 Coalition, and the Greater Lafourche Port Commission. To date, eleven miles from Port Fourchon to Leeville within the planned 17-mile elevated highway project from Port Fourchon to Golden Meadow has been completed.

“The LA 1 Improvement Project is vital to securing access to our Gulf energy resources and thousands of Louisiana jobs, provide a safe hurricane evacuation route, and build coastal restoration projects,” said Governor Edwards. “We are pleased to break ground on the next phase of this highway project that will strengthen the economic and environmental resiliency of the region. We look forward to a continued partnership with the community and the LA 1 Coalition to complete construction on this critical corridor.”

LA 1 is the only highway that services Port Fourchon, which supports nearly 18 percent of American oil production and four percent of gas production, resulting in a $4 billion a year impact on Louisiana’s economy. The highway also provides access to coastal marshes for restoration and protection projects, and serves as the sole evacuation route for Port Fourchon and residents of Grand Isle and lower Lafourche Parish.

“The LA 1 Project is an integral part of the Greater Lafourche Port Commission’s holistic resiliency effort,” says Chett Chiasson, Executive Director of the Greater Lafourche Port Commission and Chairman of the LA 1 Coalition. “We know that Port Fourchon’s continued success is dependent on the stability and dependability of this critical highway. Completion of the LA 1 Project from the port to Golden Meadow is essential to the future growth and resiliency of our entire region.”

The start of Phase 2E coincides with continued growth at Port Fourchon and efforts to strengthen the port’s position as the premier Gulf of Mexico energy port, including construction of a planned $888 million LNG plant and the signing of additional new tenant leases. Port Fourchon is also actively pursuing a deeper draft to accommodate industrial development on Fourchon Island and is a leader in beach restoration and marsh creation in the region.

“The LA 1 Coalition is grateful to Hess Corporation, Noble Energy and all of our partners who are making Phase 2 of the LA 1 Improvement Project possible by providing match funds to leverage state and federal investments. This represents the strong partnership that exists between our community, industry, state and federal governments to advance the LA 1 Project to completion and strengthen the resiliency of our working coast,” says LA 1 Coalition Executive Director Henri Boulet. “We are committed to getting the job done.”